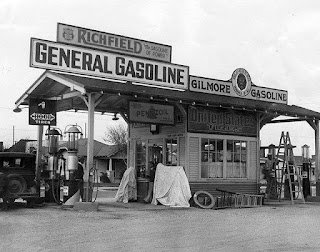 Yesterday across the DFW metroplex a strange thing happened.

It started out with rumors that refineries near Houston were closing, I'd heard that for a few days, and it was true, some were.

Then the news picked up the story and began forecasting a "gas shortage", and by 5pm Thursday night the lines at the gas station in some places were over 2 hours long, filled not with people whose tanks were empty, but by people who feared that they wouldn't be able to find gas. At the gas station by my house alone I saw people topping off cars, motorcycles, lawn mowers, and extra gas tanks just in case.

It reminded me of that scene in It's A Wonderful Life where there's a run on the bank, everyone screaming for their money. And while that film is set during the Great Depression, the people's fear of lack, actually creates it. And that's what's happened in DFW with our gas.

The fear of not having enough created the very lack we feared, our whole metroplex becoming a self fulfilling prophecy and it should teach us something about fear.  Jim Richards says "whatever you focus on is what you get" and he's absolutely right. Whatever we focus our thoughts and energy on, is what will manifest in our lives. Fear pushes us to make vows and judgments about ourselves or the environment around us that are founded on false beliefs, and when that happens and we act on those beliefs, it becomes the mechanism to make what we didn't want to happen, occur.

Jesus tells us exactly this in The Parable of the Talents. We find one of the men entrusted with talents has a fear of losing the money, and because of this fear he buries his talent to keep it safe. The ironic thing is that his fear makes the very reality he didn't want actually happen. While the other men are entrusted with more, he loses the little he has.

This morning our governor issued a statement that there was in fact no shortages, just delays in deliveries because of the flooding on the roads. Our area will have gas within the next two days, and yet our fear of there not being enough created mass panic, and a lot of empty gas stations, and those that really did need it (and weren't just topping off their lawn mower) couldn't get it.

That's the power of fear---and it's only a power that we give it. Fear is born out of the original lie in the Garden, that we can somehow provide, protect, and gain provision without the Lord, and it will fail us every time.

The world and the enemy capitalize on this, but it's always our choice what we empower in our lives: love or fear. Because in love there is no fear---in love you know that all power, provision, and protection come from a God who loves His kids fiercely.

So what do you believe?

There is no fear in love, but perfect love casts out fear, because fear is by suspicion, but he who fears is not grown up in love.
-1 John 4:18-