Why Wonder Woman is So Important for Women

My dad loved wood working, and to this day one of my favorite memories is of him carving this little wooden unicorn that he put on a wooden pedestal for me. He colored it white with pink hair, and presented it with pride. I can still smell the garage workshop, the wood shavings, and the faint smell of smoke from the cigarettes he'd occasionally sneak in, despite my mom's best protests.

I remember wanting to be just like him. What an amazing super power, I thought, to carve a magical unicorn out of a chunk of old wooden fence! I wanted to create something from nothing, just like he did. But that desire came from seeing him do it in the first place. 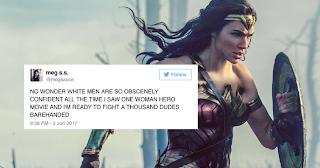 Children have to see things, in order to be able to know they are possible. This goes for both the bad and the good. Imagine the first time you saw tragedy? Injustice? Rejection? Favoritism? It marks you because it first surprises you. Until you see it, you don't know it exists in the world. And it is the same with great things like freedom, wholeness, and health.

I can still remember the first time I heard a strong woman preach. I was in Bible College and a friend asked me to come to a Joyce Meyer conference. I was captivated instantly, surprised by her candor, inspired by her intellect, and delighted by her wit. I'd never seen a woman like her, and in that moment, I knew what was possible for me.

That same reaction happened for me in Wonder Woman. She was graceful, empathetic, strong, unwavering, and brave. She delighted in a baby on the street, savored an ice cream cone with delight, hurt for those that were wounded, and took out a sniper in a bell tower to save a helpless village!

There was no man hating in her girl power either. She did not have to steal someone else's power, to gain her own. One of my favorite scenes was when she sat down after saving the town, when Steve (Chris Pine) turns to her and says, You did it. No, she exclaims, we did.  She won't take the glory all for herself, nor shame others who are weaker, the definition of true strength. 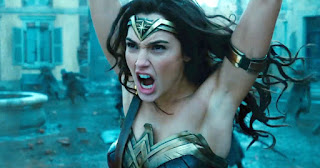 A woman on twitter said "no wonder white men are confident all the time, I saw one woman hero movie and I'm ready to fight a thousand dudes barehanded." And while it was meant to be funny, what she was feeling came from seeing someone who looks like her doing things she didn't know were possible. My husband has been seeing super heroes who look like him and whom he can identify with his whole life, while I have not.

I cried in every battle scene, not because I was feeling for those in the movie, but because the little girl inside of me was exploding with glee at what was possible, just as I had when my dad had crafted that wooden unicorn. I thought of all the little girls who will grow up seeing this and knowing what is possible--that someone who looks like them can be Wonder Woman. Or a ghost buster. Or a Jedi.

We talk in the church often about bravery, strength, and spiritual warfare, but most little girls in 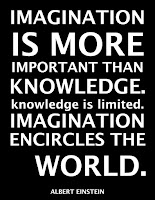 Sunday School have had no visual context for it. We get the princess thing, the damsel in distress, the maiden needing to be woken from slumber by a kiss, but a warrior? Most of us have never seen it.

And I hope we won't waste it. I hope every mom takes their little girls to see what a woman warrior can look like, because it's high time for the Deborah's to rise up in the church--women who are both strong and feminine, who can fight battles in the spiritual and physical, and still delight over a baby or an ice cream cone, who can hold the world in wonder, and not waiver from their beliefs. Women who don't need to tear men down or steal anyone's thunder. Women who know who they are, and what's possible in the Kingdom.

Wake up, wake up, Deborah!


Wake up, wake up, break out in song!