My husband and I sat at dinner, engrossed in a subject that I'm sure would have made the other patrons squirm if they'd been able to hear. It was about lust, porn, and the churches misguided solutions for it. As a man who has struggled with lust, so much so that it nearly wrecked our marriage, my husband has some strong opinions about it. So when I asked if he'd guest post here, and he accepted, my heart leapt for joy! Below are his words, and as I read them there are tears, because God has been so faithful to us. This, my friends, is the start of a revolution--of a generation of men who won't be told what they cannot conquer. This is the story of a man who has not only killed a monster, but come alive in the process.

I'd tried it all. Every program dedicated to accountability, every book related to lust and porn. I'd read it, I'd done it, and at the end of the day I couldn't shake the need to see it. In fact all those accountability programs did was turn me into a better liar. I got really good at hiding what I did from my friends, my wife, and my computer. The need for it was like an addiction. The more I viewed it, the more I needed it. The monster, lust, began to engulf my world, escalating with each view, and with each view--the guilt and shame that drove me to it over and over.

If you'd asked me then why I viewed it, I would've told you I didn't know, and that was the truth. I wanted to be a Godly man, and I wanted with all my heart to conquer this. It was like a cancer, eating and destroying everything in it's path, including my marriage. That was the worst of it---knowing how much it hurt my wife, and feeling helpless to stop it. I knew deep inside of me there must be a reason, but no program I'd participated in had helped me to put words to it. Until last year.

My wife had started participating in this group at church, as a part of her own healing journey with monsters I won't share with you here, and I started noticing the difference in her. God was up to something! She'd bring the book and workbook home and show me what her group was learning, and something in me started to rise. So when they offered a men's group in the same vein, I cautiously joined.

I didn't know what to expect. I'd been to groups that were much like AA meetings, telling men we'd always struggle with lust because we were "visual creatures" and that we had to put in safeguards. I cannot tell you how depressing it is for a man caught in the grips of this addiction to hear that he will always fight it. I didn't need another group that taught me defeat before I'd even started.

But this group was different. This group didn't focus on how we'd acted out, it focused on why. For the first time, I was able to be honest about how I felt and what I'd gone through. I was able to open up about my childhood in ways I'd never thought I could in front of other men. And in the sharing with each other, in the exploring of why we thought the way we did, something started to happen.

We started to heal.

Because monsters like lust, they thrive in darkness, and they relish in the religious. Monsters would like nothing more than to convince you that they will always be there, waiting to pounce. They breed fear, and love the blame and control that follows.

Each man in the group had a struggle and a past. Mine began in childhood with neglect, shame, abuse, and lies that began to color the way I saw myself, God, and others. But as each lie was revealed and each wound grieved and healed, I started to see things differently. It began to change how I viewed both myself, and the women around me. No longer were they objects, and as I began to love and respect myself, I began to love and respect them as God's daughters.

Women's bodies are no longer wrapped in fear for me, because I can see and appreciate beauty without taking it any farther. When my wife told me about some strict dress codes that some churches and ministries enforced, I shook my head. We constantly tell men that they are visual, and in doing so we encourage them to continue to blame their thoughts on the modesty of those around them, which is for all intents and purposes out of our control. The only thing we can control in this world is ourselves.

So what if instead of blaming the world around us, we told men how powerful they were in Christ, and how they had the ability to choose how they thought about others? What if we encouraged men to seek healing from their pasts and talk openly about the wounds that have colored their thinking?

Well then we'd breed over-comers instead of victims.

Lust trapped me in a cycle of shame and loneliness. It kept me from intimacy with both God and others. And the shame! The shame behind that lust veiled every attempt I made at making meaningful connections. But eight men helped me shed light on it {and many other monsters in my life} and monsters--man, they hate that!

Some men will read this and won't believe me. They've convinced themselves they'll always have to live this life. I don't blame you. You're told that from Pastors, from friends, from the church and world at large. But you are not weak, and the God that lives inside you makes you the most powerful creatures this side of heaven, much more powerful than the monsters you face.

The key to true healing is not found in sheer will power, nor in striving, blame-shifting, or strict boundaries. The key is found in vulnerability and openness, on shedding light into the dark and wounded places and letting Him heal them. There is immense power in the ability to open up. It isn't easy, and monsters love to convince you that by doing so you'll somehow lose that man-card you hold so dear.

But courage men, this is how we overcome! Exposed, all monsters flee.

7 He who overcomes shall inherit all things, and I will be his God and he shall be My son.
Revelation Chapter 21 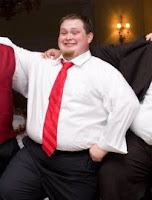 Kevin is husband, BBQ sauce champ,
and resident IT guru to his wife of seven
years and has recently found his passion
in helping men to be honest and vulnerable
about the things they struggle with through
a local program called Mending the Soul.
He believes in freedom, healing, and God's
promise that we are all over-comers.  If
you'd like more information about his story,
he can be reached at kevin.headrick@me.com