There is only one Lawgiver and Judge, the one who is able to save and destroy. But you--who are you to judge your neighbor?
~James 4:12~

I used to think that giving grace was simply seeing another person do something wrong {bless their poor little hearts and souls} and loving them anyway. That's what most of us are taught in Sunday School at least.

But that in itself is a judgment.

I mean, there are some moral absolutes here. Murder is probably always wrong...stealing, adultery. But I'm talking about the greyer areas. I'm talking about "why ______ forgot to say hello as they walked by, why ______ sounded so annoyed when she answered me, or why would ________ say that in that tone of voice." I'm talking about when you walk by and hear bits of conversations and think, 'well that sounded horrible' even though we probably only know one side. It's the grey areas that we notoriously tie significance to. 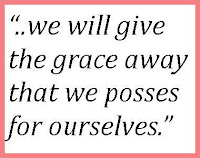 And though it really doesn't sound that bad, judgment is insidious, weaving its way into our hearts and shifting, if ever so slightly, our perception of things around us.

To judge another's (or even our own) motivations, intentions, or heart sets us in God's place and makes us our own source of information.  I don't know about you but I'm a pretty bad judge of my own heart, much less anyone else's! This doesn’t mean we can’t address behavior, tell someone how they've made us feel, or engage in healthy conflict, but the second we try to figure out, assume, or infer why someone's done what they have, we've crushed grace and given judgment a seat at the table.

Can I say too, it's not easy, to unlearn years of giving ourselves permission. We make judgments almost without a thought, multiple times a day without even realizing it. But almost without fail we will give the grace away that we posses for ourselves.

Grace is simply laying down our right to judge anyone {including ourselves} while judgment stands as the ultimate grace-killer. In an atmosphere devoid of grace hurtful conflict happens, but where grace flows there is understanding, love, and forgiveness.

The choice is up to you.