The other day I went for up for prayer. The person in front of me used words like repentance, sanctification, justification, and spiritual roots' in answer to the hurt and pain presented. I inhaled sharply because those terms not only felt harsh but cold and unfeeling. I knew they'd meant well, but I couldn't imagine God talking to one of His daughters like that. I pictured instead a soft face, an open lap, and a 'crawl up here daughter, and let me speak to you about who you are. Let me talk to you about your beliefs.' 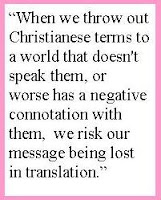 We live in a culture here in America that is becoming increasingly disillusioned, both secularly and spiritually {think Occupy movements and post-modernism}. It is both a blessing and a curse, but most importantly it affords us the opportunity  to look within our own church culture to see what, if anything, we have contributed.

To us, words like 'repentance,' 'justification' or 'sanctification' {assuming you even know what they mean} aren't foreign or even condemning but to a world that  has no accurate frame of reference for these words, they are loaded terms. And really, can you blame them? Westboro Baptist, evangelists on tv programs, they use the same terms we do. The very worst of the church often ends up representing the best.  That's not intentional most of the time, but when we are silent on issues, or when we fail to us our words to accurately depict the Father's heart in a language style the world can understand....

You catch my drift.

I'm not saying we should walk on eggshells or get rid of clearly biblical terms. I'm also not saying we should avoid important tenants of the faith like repentance. But when we throw out Christianese terms to a world that doesn't speak them, understand them, or worse has a negative connotation with them,  we risk our message being lost in translation.

Paul was not above changing his approach, his way of eating or dressing, or even his way of speaking (though I'm infering here)  if it meant that His message would be successful. If we are called to anything as Christians in this culture it is this; to be discerning and adaptable as we speak His heart to the world.

Words matter because the person hearing them matters. Paul knew that, ending simply with this, "I do it all for the sake of the gospel."

And may we also.