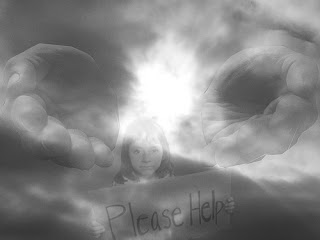 "Don't begin by traveling to some far-off place to convert unbelievers. And don't try to be dramatic by tackling some public enemy. Go to the lost, confused people right here in the neighborhood. Tell them that the kingdom is here. Bring health to the sick. Raise the dead. Touch the untouchables. Kick out the demons. You have been treated generously, so live generously." Matthew 10 (MSG)

Years ago I was on my way towards Bible College on I-45, headed into Tulsa. I had a long drive ahead of me and was yearning for a meal and a clean bathroom.

That's when I saw him. Somewhere between the on ramp and the stop light. His skin was dark, freckled, and sunken. He wore a green jacket two sizes too big and a cabby hat pulled down low. In his hands was a cardboard sign, weathered and torn, that simply said 'Hungry.' Just one word. No ploys for work, no 'please help me I have five kids.'

Seeing that, I did what my mamma told me never to do. I picked him up. Thoughts ran through  my head, mostly judgmental ones. Ones that had to do with why he was there, what trouble had brought him this low, and was I by indulging him, simply hurting him. And then I thought of my own safety. This guy was a stranger, and could overpower me if he wanted to. Honestly, I'd have turned right around except that word on that sign, it put a bullet in my chest.

I surveyed him as we drove to the nearest eatery, and as he ate. Mostly bones, you could see the merit of his sign in his hollow cheeks. He seemed genuinely thankful. He didn't ask why I'd picked him up, but he asked about my life. He'd hmmm at some parts, but mostly he just ate and seemed to enjoy the company. Two big Macs, a large fry, and three cokes later, he was finally full. Man! he finally exclaimed as he sat his hands on his belly. That was goooood! First meal I had in three days!

Three days. I wondered how long it had been since he'd sat at a table with anyone. I bet longer.

We got back in my Ford Focus and headed to his perch. Me, relieved he hadn't been a serial killer, and him full, at least for now.  He sat down, this time using his sign as a seat, but I knew it wouldn't be long before he'd have to hold it out again.

I know the above passage in Matthew 10 is often the one cited for the 'To the Jew First' evangelism movement, and I'm not refuting that application. But I can't help but feel we missed  another one here.

Jesus was speaking to Jews, while in Israel. But if we applied that passage today, what would it mean for us? It might sound something like 'Don't go to far off places like India or Africa in search of the poor and needy of Christ. You have those right here in your own town!' And while I'm not discouraging the call to those that give their lives to foreign lands, there is much to do for those left at home.

If every Christian, in every community across the globe followed these words, went out into their own communities, what that might do for men like the one above. If we started a grassroots campaign to heal the sick, raise the dead, touch the untouchables, and love the unlovables right where we are...

I think we'd be onto something. Something unstoppable, revolutionary, and true. Something that looks a lot like Good News.

I think of that man often. I haven't done anything like that since, but I'm thankful for him. He taught me much about myself, my own thoughts, and how similar we all really are. One meal at McDonald's does not a problem solve, but it was the start of a spark in my own heart to reach out to another in love. I drove away that day knowing in my gut that he wasn't only starving for food but for affection, love, community, and life. And as it turns out, so was I.

And maybe we're all starving too. For love, authentic community--maybe even for each another.

34-36..."Teacher, which command in God's Law is the most important?" 37-40Jesus said, "'Love the Lord your God with all your passion and prayer and intelligence.' This is the most important, the first on any list. But there is a second to set alongside it: 'Love others as well as you love yourself.' These two commands are pegs; everything in God's Law and the Prophets hangs from them." Matthew 22 (MSG)