How to change the world 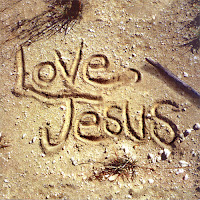 We are ready to start washing feet instead of waging war.
~Rachel Held Evans

Last week Obama announced he was officially in favor of gay marriage, the bomb heard round the world--and the fall out isn't pretty.

One picture posted in response via social media showed Jesus with a whip and was captioned, "What would Jesus do? He'd clean house!" The comments ensued on both sides, none of which were productive.

It's important to note that before we go all rambo on the government (or post any more angry facebook pictures),  the one and only time Jesus seemed to want to 'clean house' (with a whip no less) was actually not geared at the oppressive Roman government, but at the religious leaders of the day. In fact, more than anyone else Jesus called out those leaders, His anger almost always geared toward the 'church.' (or in this case the temple)

And yet here was the Roman government, notorious for it's greed, oppression, and serious debauchery, and yet He hardly addresses this. Why?

The Jews asked this same question, their expectation of a the Messiah being someone who would conquer the Romans, "clean house" so to speak.  They dreamed of a King who would sit on the throne of David, establishing a theocracy with God's chosen people by His side.

But Jesus was more grass-roots, his intent focused on a Kingdom that couldn't be seen--and He knew something we've long forgotten, that the hearts of men can not be won by manipulation and control. It's been tried over and over again from the inquisition to what we affectionately call the "culture war." And while Jesus will come back to rule one day, His first visit was not about domination by brute force, but about salvation.

And yet we've have been trying to dominate and control ever since, waring with those around us, pushing the Kingdom on people with hell-fire-and-brimstone machetes. And all because we've embraced domination and control as our chosen weapons.

But God is ridiculously, amazingly un-controlling. Jesus' interaction with the rich young ruler and the parable of the prodigal son teach us two things; God values us, but He values choice more.

Because without choice, there can be no genuine love. Without choice we are drones, servants who serve a master instead of children who love a Father.

So is it any wonder that this generation is backsliding, or worse---fleeing? Those who've been forced into church pews by well meaning adults and the promise of a get-out-of-hell-free card, those who've been condemned, who've had bibles literally and figuratively thrown at their head but have never experience the love of The Father. They are hurting for love, a love that came in the form of a God-Man, a love that doesn't throw stones or name call, picket at funerals, or shame.

His example, his strategy for invading the earth was simple; one heart at a time and always with truth told through love, a force stronger than control or domination combined.

If we want to change the world, much less this country, we must first and always start there.