A phrase I'd love to phase out 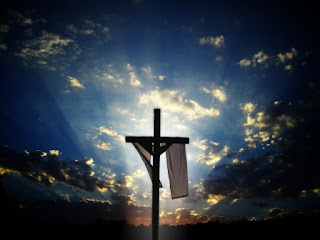 Every religion in the world tries to get you to become by doing. Christianity however, says you can do because you have become.
~Dr. James B. Richards

I'd tried everything. Worship choir, bible college, bible studies, prayer gatherings, classes, ministry sessions....anything I could do to make myself feel more worthy. Do more. Be more. Achieve more. I believed the lie. I was not good enough.

And worse, contained in this lie...that He was not enough.Somewhere somehow it crept in. I know I'm not the only one that bought it. That bought the lie that what He did that day wasn't enough. It's everywhere. In our churches, our homes, our bible studies and classes, even in our verbage; Christianese.


Oh yes, we have our own language. If you didn't grow up in church, than you know exactly what I'm talking about. It's the way we talk about salvation, justification, and sanctification (say that five times fast). It's a verbage unique to those immersed in the Christian culture, and it's a dangerous weapon to wield. God created this world by simply speaking it into existence and so we know this well: words matter. When we speak, we present a picture to each ear we beckon, and it isn't always accurate. Our "christianese" is often more wrong than right and the one below happens to be my favorite, and within it an insidious message we've propigated too long.

You owe God you scoundrel! He died a painful, ugly death for your sin, so go out now {you servant} and live for Him.

Jesus did not die nor rise in an effort to 'up the ante' so that we'd owe Him. Salvation is a free gift, freely given, freely received. We are no longer servants to a master, we are Sons and Daughters who can approach His throne boldly because of Jesus.

Dr. Richards had a point in the quote (above) when He keenly pointed out that while religion asks us to do, Christianity says we are. Because of Christ we are righteous. Done, finito benito! Our identity has changed. Like 'The Artist Formerly Known as Prince," we are not our former selves. We are a transformed being, washed, brand new, born of His spirit because not only did He die for us, but He ROSE for us too. (Did we forget that part?)

He conquered death so we could too. He conquered sin so that we could walk out our new identity in victory. All the striving and contriving in the world cannot make us righteous. He already did that and when we accept what He did, He comes to live in us.  We become a part of the upside-down, topsy-turvy Kingdom of God where the leaders serve, the foolish confound the wise, you lose your life to find it, and you can do because you already are. Whew! Did you get all that?

And then there's that pesky "for Him" part. Jesus said at the last judgement people would come claiming to know Him, saying that they prophesied and cast out demons in His name (or for Him) and He sends them away, calling them strangers, because they never really knew Him. They never had a relationship with Him.

If there's anything we know it's that God doesn't need us for His purposes. He wants us because He loves us, but He could do this all without us. If we have a relationship with Him, if He lives within our hearts, then it's much more likely He'll ask us to do something "from" Him, not "for" Him. The former implies servanthood, the latter priveledge, the priveledge of being an heir to a Kingdom, honored to go about our Father's business.

See, locked within that little phrase is alot of theology, and even more bondage. The human capacity to misunderstand what God is doing is well documented. We get things wrong...alot. We twist and turn it until it's about us again. Until we are at the center of things, because if we can strive to get salvation, than it's really about us. It's about what we can do, what we can be, what we can achieve.

But God. I love those two words! God, in His infinite wisdom flips the tables on us with Jesus. It's no longer about what we can do to get into His good graces. It's about what was done for us. It's about Jesus. The spotlight is shifted and His grace becomes a free gift, lest any man should boast (or make it about him/herself!)

This Easter, as we remember that it isn't at all about us (what we can be, do, or achieve) let's be careful with this weapon we weild. It might make all the difference to that friend you brought to church, or that neighbor that just lost his wife, or that drunk that snuck in the back, each one in search of words filled with hope, truth, and life. Let's throw out our cheap cliches and christianese verbage in lieu of the truth. I hear it works much better that way.