On GCB, ABC, and WWJD 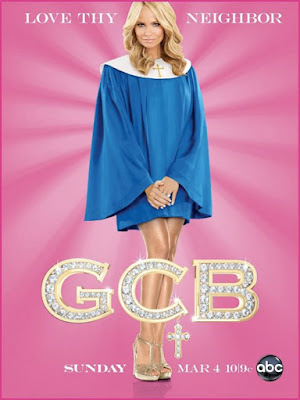 But I tell you, do not resist an evil person. If anyone slaps you on the right cheek, turn to them the other cheek also.
(Mt 5:39)
If you've seen the hoopla surrounding ABC's newest program GCB (which stands for 'Good Christian B****es'), then you know it's got a lot of Christians (and Southerners) up in arms. Facebook, Twitter, and ABC's complaint lines are lit up with people that are angry, feeling that their culture, and religious beliefs have become the focus of satire.

Charisma Magazine seems to be at the forefront of this controversy, relating the airing of the show to the propaganda campaign that "Hitler used to kill six million Jews" (and yes, that means Godwin's law is alive and well).

But it has me wondering, what does Charisma hope to accomplish by such an article? Isn't that just playing right into the 'holier than thou, high and mighty, angry and offended' stereotype that GCB is trying to display? Isn't there a better way to get our message across than comparing the issue to the mass murder of an entire people group?

Between the anger and the angst, it seems no one has stopped to ask the hard questions---like is this stereotype sometimes true? And if so, how can we combat it?

(Let me give you a hint. It doesn't start with anger, bitterness, or a holocaust comparison.)

It starts with looking inward.

“Why do you look at the speck of sawdust in your brother’s eye and pay no attention to the plank in your own eye? (Mt 7:3)

I know I've certainly at one point or another portrayed a less than ideal version of Christianity (there is a reason why I don't have a fish on the back of my car....) and I assume you have to.

And maybe after we look inward, we can begin to look outward--not at what people have done, but on why they've done it. This stereotype exists for a reason, which means there are a lot of people who have been wounded by Christians--walking wounded-- and the salve for those wounds won't be more anger and offense......

It will be showing others the grace and love that should characterize our faith, and it will be doing this over and over again that will turn the tide on those stereotypes, and more importantly on people's hearts.

Jesus went to the cross silently, calmly, humbly. When Peter raised a sword in defense, Jesus rebuked him. In fact He told the disciples that if any town wouldn't receive them, to leave and kick the dust off their feet.

Christianity should never be a PR campaign. It should be a love revolution, surprising the public at large with acts of grace, humility, and truth. Showering the world with the light and love of Jesus.

And that's hard to do screaming from the rooftops in angry protest. The Lord doesn't need our well meaning defenses and bitter offenses....He needs hands that will love His children.

So whether it's GCB or ABC, maybe the question we should all be asking is simply WWJD?


(If you want to lodge a complaint with ABC, I encourage you to call this number: 818-560-1000, but please remember that the person on the other line of that phone is a human being, a heart God cares about, and more importantly one that He died to save. Stand for what is right, but do so gently, kindly, and gracefully.)
Email Post
Labels: culture life-giving principles