When God is not a gentleman... 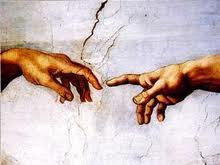 In bible college I chose to attend probably the most charismatic of churches I'd ever been to. 'Slain in the spirit' and 'speaking in tongues' (loudly I might add) were always part of the service, but for those too timid, or simply downright terrified, our Pastor had a saying; God is a gentleman. It was his way of saying 'don't worry, He won't make you do anything you're uncomfortable with.'
So, for a long time I pictured a kindly old man, wise but soft spoken. If you walked away from Him, He simply waited,where He always had been, like the Father in the prodigal son story. I liked this God. I needed gentle. My war torn heart cried out for a Father who wasn't pushy.

But as my heart healed I noticed something, small at first, but important none-the-less. It happened at a time in my life where I was running from something God had called me to. I knew He'd called me to it, but I didn't want to deal with it. I didn't want to hear about it. And so, in stubborn fashion I ignored the softly spoken invitations. But God didn't stop there. People gave me prophetic words, asked about it, and I began to see it everywhere. (He seems to deal with me alot like this! )

God was not going to let me run this time.

When you read the Song of Songs you get a very different view of God. A God who pursues us relentlessly. This isn't the wise old man waiting patiently in the background. This is a radical, trail blazing, heart pursuing God who doesn't give up on His creation!

Song of Songs 2:14 My dove in the clefts of the rock, in
the hiding places on the mountainside, show me your face, let
me hear your voice; for your voice is sweet, and your face is
lovely. 15 Catch for us the foxes, the little foxes that ruin
the vineyards, our vineyards that are in bloom.

My stubborness needs this God, the one that conks me on the head over and over until I see the light, who continues to speak when I won't listen. This is a God who isn't a gentleman in the traditional sense of the word. This is a Radical Lover who never leaves me in my muck!
This is what I love most about God, His multi-facetedness. You cannot put Him in a box, nor pigeon hole His character. His is this and that, and everything in between because He deals with each of us as individiuals. He knows our strengths, our weaknesses, and our hang-ups, and He pursues each of us differently because of that.

He is a gentleman, He is a zelous and wild lover, and yet He is so much more, calling each one of us into a relationship with Him that promises to be anything but boring.