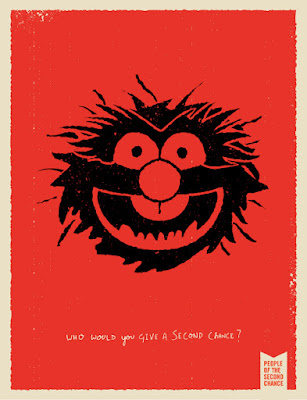 I love People of the Second Chance for a so many reasons but mainly because they are revolutionizing the way we think about the word 'grace.' Grace is undeserved mercy and unmerited favor. Grace is a second chance, another stab at life despite your previous actions, and the POTSC know it!
Animal is one of my favorite Muppets. I mean he's cute and fuzzy, but underneath that two feet of darling is a monster. He's rude, curt, uncouth, unnecessarily blunt, and just plain odd. We all have Animals like that in our lives. The boss with the bad temper, the husband who ignores you, the co-worker with the potty mouth, the needy friend, that woman at the cash register that was rude to you for no apparent reason. We all have them, and I don't know about you but sometimes I just want to close my eyes and wish them away and then I hear this whisper...
You have your 'Animal' moments too.....
Ouch. He's right though, I do. I've found myself angry and lashing out at those closest to me, annoyed and irritated with people at work, snapping at the nice cashier, hassling the waiter who I think is taking too long...I've got my moments.

1 Corinthians 6:9-11Don't you realize that this is not the way to live? Unjust people who don't care about God will not be joining in his kingdom. Those who use and abuse each other, use and abuse sex, use and abuse the earth and everything in it, don't qualify as citizens in God's kingdom. A number of you know from experience what I'm talking about, for not so long ago you were on that list.

Guilty as charged. Thank goodness the verse goes on...

Since then, you've been cleaned up and given a fresh start by Jesus, our Master, our Messiah, and by our God present in us, the Spirit.

In a dorm room in Boston, God gave me, an angry, lonely, confused girl a second chance at life. He gave me grace and for every 'animal' moment that still resides within me, He covers that too. What message do we send about God to our "animals" if we simply walk away? If we condemn? If we withhold the grace He so freely gives to us?
Can you give the 'animals' in your life a second chance? Join the revolution here..

Matthew 10:8 Freely you have received; freely give.