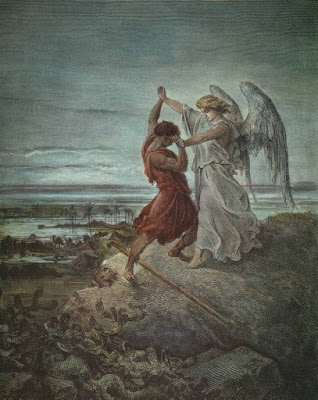 24 So Jacob was left alone, and a man wrestled with him till daybreak. 25 When the man saw that he could not overpower him, he touched the socket of Jacob’s hip so that his hip was wrenched as he wrestled with the man. 26 Then the man said, “Let me go, for it is daybreak.”
Genesis 32

Jacob was smart. He'd always been the smart one, and Essau the hunter and brute--more brawn than brains. And yet Essau, that dull-witted cretin, was first born (and by only seconds!)

I should be the first born, thought Jacob.

I should be the one getting the blessing, the inheritance. At least I'd know what to do with it!

But Jacob had a plan, one he'd mulled over for years--a way to get the inheritance that clearly belonged to him-to trick Essau and steal the blessing.

And so he did what he set out to do. Unfortunately Essau was angry (and physically able to do harm) and Jacob had to leave the only home he'd ever known in fear for his life. The story goes on that things didn't improve for young Jacob. He worked for a man who tricked him into marrying several of his daughters, and eventually, like all things we do, his consequences caught up to him.

Then the story gets a bit weird.

A man, nameless, wrestles with Jacob all night, the night before Jacob is planning to see Essau. A man that is really God and once God sees that Jacob is not so easily subdued, he does the only thing he can to finally get his attention---he touches his hip and breaks it so that Jacob will limp for the rest of his life. He is forever humbled and reminded about that night.

Why would God come down to wrestle like a man with Jacob?

Because God cared about him.

Despite suffering immense consequences for what he'd done, Jacob hadn't yet learned humility. Never once in Genesis does Jacob ever repent or acknowledge what led him to this place. And so God does the one thing He can to get through to him.

I once heard a pastor speak on this passage and he recounted a conversation he'd had with his doctor, who told him that the hip joint is one of the strongest in the body and to knock it out of place would take immense pressure.

I, like Jacob, had a stronghold. I had been singing since I was 8-- contests, choruses. I'd won them all, and I was headed off to The Boston Conservatory of music, second in the nation next to Julliard for studying the arts. I was excited, enthralled, ready.

Up to that point nothing had ever been able to break me. I was strong, confident in my abilities and with no room in my life for God. In fact, I couldn't see the need for him when he'd let my family suffer so--the year before my dad had been diagnosed with an aggressive brain tumor, but I'd done just fine on my own and when anyone tried to speak to me about God, I argued.

And one morning I woke up to the oddest discovery--my voice was gone. Instantly, and without warning--gone.

The treatment? Vocal therapy and five weeks (FIVE!) where I could not speak or whisper.

Suddenly the only thing I'd ever had confidence in, what I'd used to define myself, was gone. With no voice to argue back, one of my dearest friends finally shared the gospel with me. This time I heard her. This time I understood...I could see.

He'd broken me in my strongest place and taken away the very thing that gave me security, so I could finally see Him, see myself, see the truth.

Jacob gained a new identity the night he wrestled with God--Israel--and later that next day, he gained a new family. Jacob, clearly humbled in a way Essau could see, reconciled with his long lost brother.

The night my friend shared the gospel with me, I gained a new identity, and a new family. I was grafted in through Christ. Adopted. Accepted. Loved.

I wonder if like me, Jacob ever looked back to ask what would have happened had God not broken him. I do. I knew the pain I was in, the things I'd used to quench a thirst for something more. And I thank God because I know where my life was headed had a loving, graceful God not interfered.

Sometimes it's the strongest places that need to be broken in order for us to really see.