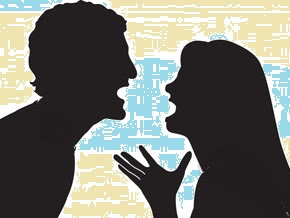 'A CH`I maneuver may be CHENG, if we make the enemy look upon it as CHENG; then our real attack will be CH`I, and vice versa.

The whole secret lies in confusing the enemy, so that he cannot fathom our real intent.'"
~The Art of War by Sun Tzu, Chapter 5~

"Ugh! You always do this!" I was fuming. It'd been a long day and an even longer week and I just wasn't up to the mess I came home to.

"I'm sorry I forgot! It happens. I'll clean up tomorrow."

But my mind was convinced that he was the problem, the enemy, and so I pounced and attacked with my words. And he snapped back like a turtle in it's shell. He shut down, which only made me angrier.

Which, contrary to my point of view in that moment, was not my husband.

Fear Dance--the dynamics and responses that work within a couple. That when he does this, I do that dance. That dance that happens when your buttons are pushed and you're not intentional about your response. At it's core--the belief that it is your spouse who you're fighting against.

It's a war tactic. Confuse them. Disguise the real enemy. It's the Trojan war horse of battle, and it's a tactic that's winning.

So we fear dance until we're exhausted, weak, and vulnerable. Until we don't know who the enemy really is, we just know we're unhappy. Where all that you can see is emotions, not truth.

No wonder so many couples are divorcing.

We've been played into fighting the wrong enemy for far too long. We have a real enemy, one intent on stealing, killing, and destroying all that is good in life, and marriage is good. God himself said that.

So, we need a new plan. A different way to think and respond in times of heated battle.

No more fear dancing. The enemy's tactics only work if you let them. He can only kill, steal, or destroy what you give over.

So now that you know your enemy, what are you going to do about it?