When God says something Crazy 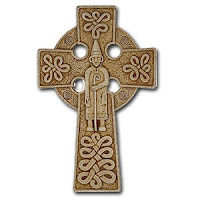 James 1:2 Consider it pure joy, my brothers, whenever you face trials of many kinds, 3because you know that the testing of your faith develops perseverance.

Patrick was 16 the day his world changed. He was from a wealthy British family and enjoyed the life of the priveledged, until one fateful day when a group of Irish raiders attacked his family estate. He was sold immediately into slavery to a man named "Milchu" and spent the next six years serving others the way he'd been served for years.

He worked the land as a shepherd and spent much time alone and away from anyone he knew or loved. In what would have been a life spent in priveledge and merry-making, Patrick was alone, a bondservant, and scared for his life. In his anguish he turned to God, and just as God had done to Joseph, Patrick began to receive dreams and visions. Eventually Patrick was guided by a dream from God to leave Ireland. Once out of slavery, he enrolled in religious courses and then proceeded to return to the land and people that had once held him captive. With him he brought the truth of God's word and His love which subsequently changed Ireland forever.

I was 21 when my world changed. It was a pretty routine doctors appointment and I was simply going to check some things out. Suddenly the nurse walked in with a huge smile on her face and said "You're pregnant, isn't that great?!" That's the closest I've ever come to fainting and vomiting at the same time. I'd just married Kevin six months prior and a child was not on our "to do" list yet. Because of my irregularity, they immediately ushured me into a sonogram room and tried to look for the size and age of the baby while I was trying to adjust to the idea of being a young mom. Suddenly two more nurses flooded the room and they called the doctor in to look at the sonogram. I glanced from face to face trying to figure out what all the fuss was about, hoping to discern what their worried looks meant.

The nurses led me to another exam room and told me to wait for the doctor and that she'd explain everything. When she walked in, she sat solemly in front of me. I don't remember much of what was said other than that I was pregnant, that I was losing the baby as we spoke, and that it seemed like it was an ectopic pregnancy. They'd also noticed some cysts that needed to be checked just in case they were cancerous. The pain of what I'd just heard rose up in my chest and turned into sobs and when I stood up to ask for a glass of water, blood surrounded me and soaked through the gown I'd been asked to wear.

When I read the verse, shortly after my miscarriage, I laughed out loud. Consider it joy? Joy, God, really? You're off your rocker! You're crazy! How could I find something good out of what I'd just experienced? How could God be in this situation at all? For months I wallowed, played the victim, and pouted, angry that God would let me experience such pain, such unexpected pain. But as it turns out, God was there in the midst of my trial.

Once I stopped playing victim to my situation, He began to work. The miscarriage itself had actually clued me into a fertility problem that I had no idea I had. The cysts they found were not cancerous, but they were dangerous, and it's quite possible that having the miscarriage actually saved my fertility. Without it, I may have gone years thinking nothing was wrong. Since then I've gotten to minister to several women around me who've gone through something similar, coming along side them as someone who has been there and knew the pain.

Patrick had suffered greatly as a slave and captive to a nation he neither knew nor liked. He could have very easily played the victim, pouted, and wallowed . But instead he saw God in His circumstances, not that He had caused them, but that He could use them for good. He saw God in the midst of His suffering, and He let God weild his situation to fit His purposes. Patrick became the first man to successfully bring the Gospel to a mostly pagan nation. Just like my miscarriage, Patrick's servanthood was used to accomplish higher purposes.

God's heart is for us, and He would never wish suffering on us, nor would he cause it. But He can use it, He can redeem it. That's why James calls us to consider it pure joy, because like a grain of sand that's rubbed, molded, and irritated can blossom into a pearl, our suffering refines us, molds us, draws us closer to the One. Jesus told us there would be no lack of suffering in this fallen world, but there will soon be a world with none.

Happy St. Patrick's Day! While I'm not Catholic, I hope we all learn to see God's purposes in our suffering just as a young shepherd named Patrick did so many years ago. And remember, when God says something crazy, it's probably because it's true.

To read more about Patrick's journey, check out the translated version of his memoirs and letters to a friend here.