It's all in the imagination... 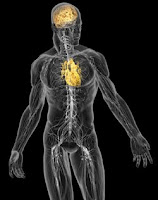 Think left and think right and think low and think high. Oh, the thinks you can think up if only you try! ~Dr. Seuss, Oh, the Thinks You Can Think!
The World knows something that we as Christians have been ignoring for a very long time, and it's killing us. Used car salesmen, advertising agencies, and television networks alike use it to sell us a range of products through one main advertising medium; our imaginations. Imagine yourself in this car (with the beautiful girl in the passenger seat), Imagine yourself buying this product... it works, and they know it. Imagination leads to thought, thought leads to belief, and beliefs leads to action, and soon you're not only visualizing how great you'd look with said product you saw in that commercial, but your thinking about why it would be beneficial and how it just might change your life. Now, we all know a new car, makeup, or the latest kitchen gadget won't really change our lives, but it's the power of imagination that makes us all think it will. Is it any wonder then that Paul urged all believers to take their thoughts captive, or that Jesus proclaimed that even thinking about another woman could be seen as adultery. They knew what we didn't....that a simple thought could be the beginning of a terrible downward spiral that ends in strongholds and bondage.
*************The Heart and Mind Connection **********
The Hebrew word for heart ("Lev") is made up of two hebrew letters, lamed and beit. Lamed carries the picture of a shepherd's staff and points upward as the tallest letter. Beit has the picture of a house or dwelling place. So the word picture for the heart is literally a "dwelling place for the shepherd."
The original Hebrew is vital to understand because Hebrew letters and words often make pictures that relay important theological truths.The Hebrew letter Lamed can also be broken down into three smaller parts:

The heart is the pathway from the body to the mind. What goes in to our minds then matters, and it matters dearly. The mind becomes the threshold on which our spiritual war is fought, and it often starts with imagination. The war can stop there too. See, the Devil cannot make up or do anything new. All he can do is counterfeit the gifts God has given us and turn them against us. Imagination is one of these gifts. Paul knew that, and he told us clearly how to use it.

*****************So What Now?******************
How do we take back that ground from the enemy? We combat him with the same gift he tried to use against us. We can use our imagination for our own spiritual health. We do this in two ways; by filtering out the thoughts that cause us harm and discomfort, and by using our imagination to help us connect to God. This is not an exposition on the power of positive thinking, or how to imagine yourself into a healthier place, because positive thinking alone cannot help us. It is the union of Christ's saving grace along with the ability to submit our mind (and our imaginations) to Him, that will result in freedom from strongholds and bondage. Freedom is not the absence of boundaries, as some will argue. These are the people that believe that they can watch a racy movie and separate that from their heart. No, freedom is not the absence of rules, but the presence of the living God. That's why positive thinking alone will not work. That's why taking renegade thoughts captive isn't the whole solution. The original Hebrew gave us a picture of how interconnected our hearts and mind are, but it also showed us the original intent of the human heart; the house of the shepherd; the dwelling place of His presence. If you have a hard time feeling His presence, you can utilize that imagination to help you. Get quiet and simply imagine His arms around you, comforting you, holding you. Imagine how safe you feel there, resting in His presence, the King of the Universe, The Father above all. Let your imagination help you connect to Him. That is, afterall, what it was intended to do. Without an infusion of His presence, without connection to Life, all our efforts are useless. But with His presence, and the knowledge of how to correctly utilize our imagination, the sky's the limit!
Email Post
Labels: life-giving principles