Geography is not the problem.... 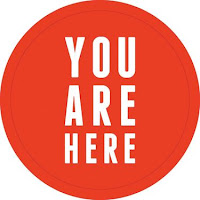 And remember, no matter where you go, there you are.


"My brother tried to stay with my mom to help her out. We all kept telling him that he was turning into her, and eventually he moved out. You have got to move out too, or you'll end up just like your nonna."

I sat starring intently at my dear friend across from me. We'd been talking about my move in with my elderly grandmother and how hard it had been. What she was saying sounded like great advice which summed up could be: move out and your life will get better. From the world's perspective, she had a point. Get away from the source of the pain, and the pain will go away, right?

I spent the next two months or so wrestling with my problem. I was in real pain, and I thought that my nonna was at the center of it. She was demanding, and often she made me feel worthless. (Can you start to hear the problem?) But if I suddenly up and moved out, what would she do? No one else would care for her, and she refused to move out of her large house......I was getting hopeless that there was a good solution to this problem.

But God is always faithful to show answers. During a quiet time in a ministry exercise, I heard that still and quiet voice; What if Geography isn't the problem? What if where you are living has nothing to do with it?

Alright God, I thought, if geography isn't the problem, what is? It was then that he showed me a core lie I'd been living my life through: I was responsible for my family's happiness. As the oldest child I'd always felt responsible for my family and many relational experiences had confirmed in my heart that this was true. Translated into my current living situation, this meant that I had to cater to every whim and whobble of my nonna's unstable and often unhealthy desires. If I didn't meet her demands, I felt guilty. Therefore, no boundaries were being set.

The truth of course, was that I didn't have to be responsible for her or her happiness.

The very next night, was a test of my new perspective. She'd had a bad day and my husband had even called me to say "Honey, we have to go out tonight. If you come home with her like this, you'll get into another fight with her." I understood his anticipation, because that had been the cycle. She'd go off, push my buttons of guilt, and suddenly we were both in a fight.

But not this time.

This time I hugged her, told her whatever she was mad at couldn't be such a big deal, and I told her I loved her. For about thirty more minutes she continued to throw a fit, but with no one else to push back against, she quickly calmed down.

God was right. Whether I was her caregiver or not, my problem was still the same: I'd believed a lie and I was living my life through it. Hearing the truth set me free to live with her in a healthy way, with boundaries. And now I'm free to love her through a set of different lenses. Her fits no longer enrage me, and with no one to fight against, those are becoming few and far between.

The problem wasn't geography at all. It was the topography of my own heart.