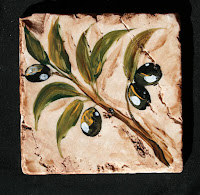 Two are better than one, because they have a good return for their work..If one falls down, his friend can help him up. But pity the man who falls and has no one to help him up!
Ecclesiastes 4:9

I love getting mail! In a world where true snail mail is becoming scarce, I covet letters and pictures sent from friends and I had just received a gold mine. I held in my hand a small treasure trove of pictures; some silly, some serious, but all worth a thousand words. They were sent by a dear friend, along with a sweet note that highlighted some of our greatest adventures during our friendship.

But the most sobering part of the picture I've just given you is that not but a month before, our friendship had almost ended. A friend and I had roadtripped down about four hours to her home where she and her future husband were living and going to school. Somewhere in the midst of that weekend we'd gotten into an argument, an argument that turned into a nasty no-holds-bar fight that ended up with me in the bathroom crying. The next day I went home early and missed out on what I'm sure would've been two wonderful days filled with friendship, love, and laughter.

I felt awful. I was sure that my actions had rendered our friendship null and void. I was absolutely positive that our relationship would never be the same. I prayed, but in my heart I was unsettled. How could she forgive me when I'd acted like that? How could anyone? How could God?

And then came that package. I smiled as my eyes graced each photo; the one of us swimming in a fountain, another of all the girls sitting in the jacuzzi with gallons of ice cream. This was an undeserved olive branch. This was grace.

Grace did not make me take her for granted. It moved me. It changed me. Our friendship to this day has been defined by grace and love. I'll never forget that olive branch that she extended that day. She reminded me that God forgives, and that it's never too late to start afresh. She reminded me that nothing was ever too far gone or broken to be restored and that God was in the restoration business.