Are you all tied up? 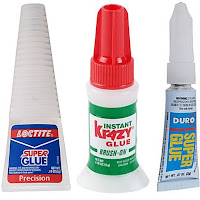 I hate super-glue. On numerous occasions I have glued my hands to other parts of my body and to other inanimate objects. I loathe that when it drips on a surface it leaves that gross and hard-to-get-rid-of film that leaves one wondering, "how in the heck do I get this off?!"

Did you know that our souls can get super-glued to people, places, and inanimate objects? Soul ties take what God meant for good and turn them into unhealthy bonds that perpetuate idolatry, codependency, and many other unhealthy expressions of relationship. There are many ways that soul ties happen; sexual intimacy, emotional intimacy, vows, commitments, or agreements...any of these can lead us to become stuck, literally.

When I was young I had an unhealthy soul tie to a male friend. We had been emotionally, spiritually, and intellectually intimate. My thoughts were consumed with him, with our time together. Eventually that relationship ended but the tie was still there. Every relationship I entered into thereafter was continuously compared to the unhealthy one I had previously shared, and not only that, but I could not seem to become as intimate with the relationships that were actually healthy. Why was this, I wondered. Why was I stuck even though both parties had seemingly moved on?

When we are intimate, physically or otherwise, we create a bond. Chemically, our bodies release oxytocin, the very same chemical that bonds a baby to a mother. But beyond the physical realm something else happens as well. It's what the bible calls "becoming one flesh." It isn't simply the act of sex, it's something much more. It's about two people's souls, (that is our mind, will, and emotions), mating as well. And as we do this, we give a peace of ourselves away. We literally glue a peace of ourselves to that person.

Even when that relationship ends, we're still there, stuck like glue. Give enough of yourself away, and intimacy with anyone else becomes all but impossible. You're spent, so to say, glued to many different people.

So how do we break free?

Awhile ago, quite by accident, I discovered the secret to getting super glue off of hard surfaces. A pumice stone. Pumice stones are made of a volcanic rock; gentle, yet strong. It can rub stains off porcelain, or get super-glue off skin without much pain or suffering.

God's love is like a pumice stone; gentle, yet effective. Breaking a soul tie may smart a bit, but as God's love rubs on us, the stains come off. How do we enter into that love?

I encourage you to take these questions to God, and to stay away from super-glue. It always ends in disaster. ;-)