The Company we Keep... 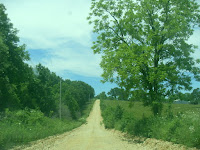 And that is one of the beautiful things about him. That the more His we become, the more ourselves we become...

~Captivating by John and Stasi Eldredge

There's an old saying that you become like the company that you keep. I haven't written here lately for so many reasons, but one of which has been that I'd felt like I'd become stuck in a rut. Nothing felt fresh or exciting. Nothing felt new. Daily tasks seemed monotonous and nothing seemed so important that it had to be put to the pen.

For awhile I chucked it up to seasons. Some seasons, I reasoned, were more fragrant than others. Some were exciting and new, and some were not. It was a bit worrisome. Old habits during this time were coming back up, and I'd felt like I'd somehow lost my identity. I felt that the freedom in Christ I'd found was slipping away grain by grain and there was nothing I could do to stop it.

It wasn't until I took all the noise out of life one Sunday and sat quietly by myself that I realized that God and I hadn't hung out in a very long while. Sure, I'd gone to church, I'd done my daily devotional, I even prayed...but it had been a very long time since God and I had really talked. Our relationship had jumped from deep to surface level, and because of that, my whole life was suffering.

As I lost that vital connection to Life, I lost the ability to truly be myself. Old voices and identities were coming back up, ones that I'd spent the last year conquering. Voices that told me I was ugly, devoid of talent, and most of all--not enough.

As I reconnected myself to the source of all Life and Love, I became more and more like myself again, and the storms of life had less affect on me. We truly do become like the company we keep...it's just making sure that we're keeping the right kind. The God kind.
Email Post
Labels: relationships