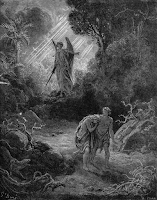 Eve is deceived . . . and rather easily, as my friend Jan Meyers points out. In The Allure of Hope, Jan says, “Eve was convinced that God was withholding something from her.” Not even the extravagance of Eden could convince her that God’s heart is good. “When Eve was [deceived], the artistry of being a woman took a fateful dive into the barren places of control and loneliness.” Now every daughter of Eve wants to “control her surroundings, her relationships, her God.” No longer is she vulnerable; now she will be grasping. No longer does she want simply to share in the adventure; now she wants to control it. And as for her beauty, she either hides it in fear and anger, or she uses it to secure her place in the world. “In our fear that no one will speak on our behalf or protect us or fight for us, we start to recreate both ourselves and our role in the story. We manipulate our surroundings so we don’t feel so defenseless.” Fallen Eve either becomes rigid or clingy. Put simply, Eve is no longer simply inviting.
~John Eldredge in Wild at Heart~

I've always been the type of girl that couldn't just take people's word for it when it came to learning life lessons. No, not me. From any early age I loved to ask "Why?" I was the kid who touched the oven to find out it's hot, and I'm the girl who had to break every rule just to see if they were worth it. Subsequently, that's how God's and my relationship has worked up until now.
I've never had a hard time hearing God. I know some people struggle with that, but I knew His voice. I just didn't always like to heed it. I'd hear that still small voice that said, "Now Alex, is that the right thing to do," and I'd roll my eyes and continue on. This habit got so ingrained in my life, that it became second nature to bypass His voice and go straight into action, leaving only destruction in my wake. I didn't want anyone controlling my life but me. God was in the passenger seat, and I was up front. Even as a free woman in Christ, I would get nervous about my life and my choices, believing somehow that I had to wrestle, control, and manipulate my way into a happy and meaningful life. I was terrified of making wrong decisions, fearful of the unexpected. I even went so far as to deny my husband my body in absolute angst that even with protection and other means, that we'd somehow have a surprise pregnancy, and a pregnancy was not on my to-do list yet. I was controlling every aspect of my life to the determent of all those in it. I was destroying my own beauty, my own life, with manipulation and control.
Then I read the above quote and Bam, God kicked it up a notch! I sat speechless in front of yet another lie I'd believed for years; the lie that God was holding something back from me, the very same lie that changed Eve's relationship with God forever. See, I'd been doing to God what I'd done to others my whole life, ignoring good counsel and His voice because I simply didn't trust that He had my best in mind.
And isn't that exactly what the serpent told Eve? God's holding out on you, He doesn't want you to see.... and he whispers that even now, to every woman on earth. God's ways won't get you anywhere. Submission? That sounds like being a doormat? Chastity, how boring! You want an exciting life don't you? You want fame, fortune, and praise.... Any of that sound familiar? I believe that's why so many young women who are raised Christian rebel...because they believe the ultimate lie. So we strive, control, manipulate, and twist things around us to fit our purposes and consequently our beauty, our vulnerability is lost.
Once the lie was exposed, I began to see how distrust of even earthly authorities in my life began with a distrust of God and how much that was hurting not only my home life, but other aspects as well, and it all started with a lie, the very first lie created by the king of liars. But now I know that living life God's way, heeding His voice and His word, isn't about us not having fun, it's about God having our best in mind. It's about God being a good God who wants good things for us.

Just wish I'd known that before I touched the stove.....
Email Post
Labels: freedom