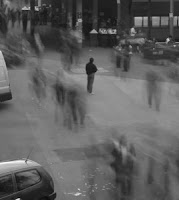 Avatar was an amazing cinematic experience for it's CGI and life like world of Pandora, but my favorite part of that movie was how the natives acknowledged one another. "I see you."

I'm not sure about anyone else but I know I've been in the middle of a crowd and felt as if no one could "see" me. I've walked into packed halls and meetings, even church services, and felt like I wasn't anyone of note. I've strolled the hallways of middle schools and high schools and felt as if people just saw right through me, as if I wasn't even there. We've all felt that pang of insignificance at some point in our lives. The world is so very big, and we feel so very small in it.

The world is a busy place, and most of the time we get caught up in the hustle and bustle without even stopping to think about the faces that we stroll right by. We forget that every face has a human being behind it, and that every human is valued highly by the One who made us all. I sat in a room earlier this month and we talked about grace and believing the best in each other. One pastor spoke out loud and wondered what would happen if we could look at every person around us with God's pillar of fire above them, if we could view God's people as He does.

What would happen if we could do that? If I not only believed the best about someone, but saw them as God does, that would certainly change my behavior. I'm sure it'd be easier to forgive, easier to give grace, and easier to understand them.

In sixth grade I had this teacher, a music teacher, that for some odd reason believed the best in me. She saw right through the insecurity, hurt, tough attitude, and brattiness, to the me she knew was somewhere in there and do you know what happened? I rose to her expectations. Adults aren't so different from children, we're just a bit taller, but we still long for someone to believe in us, to give us the grace to see past who we are now, to who we were created to be. And more often than not, those who are believed in will rise to the occasion. Jesus knew that when he picked his twelve disciples; fishermen, tax collectors, uneducated plebeians, and zealots. A ragtag gaggle of men became the stones on which our faith started. I love that in God's world view, everything is opposite. He sees the small, the meek, the messed up and the nobodies and not only does He "see" them, but He uses them to accomplish amazing purposes biblically and throughout history. He knows the intrinsic value of an individual like no one else can, and when He looks at His creation, He doesn't see our sins anymore, He sees royalty!

I love that God can use a murderer and adulterer and call Him a "man after My own heart." I love that He "sees" me for who I was created to be, and it's something that He calls us to as well. If we could all see the glory inside each other, what a different world we'd live in, what a different Body of Christ we'd be. And oh, so much freer!