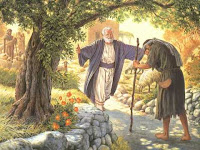 I grew up in a typical middle income class home. Hard work was valued and it was through hard work that one could achieve just about anything. My dad worked two jobs to get himself through college and then proceeded to work long hours to climb his way up the corporate ladder and these were the achievements that were celebrated. The worst offenses were those that had squandered possessions, talents, or opportunities and neglected common sense and discipline. In my home church "Godliness" was much more about what your life looked like on the outside (job, grades, physique), then about what your heart looked like on the inside.

This is what you'd call my life "rulebook." They were the beliefs and ideals I was raised with and subsequently had much to do with my expectations about my new life with my husband. I quickly realized though that my new husband came with his own "rulebook" and his read much differently. While I was raised with rules and law, he was not, and though he was no renegade, he certainly didn't get my form of legalism.

A few years in, my husband made an awful financial decision that cost us alot of money, and since I'd been raised to find those as the worst offenses, I didn't take it well. In fact, I believed that God thought the same way I did. "God helps those who help themselves" was my favorite motto, and so while Kevin looked to God to help us out of financial ruin, I knew we were "doomed." We'd squandered what we'd been given, I reasoned, so God like any good parent was going to leave it up to us to fix, repentant or not. I felt so very helpless, so very alone, and so very afraid to trust Kevin with anything. His one mistake, I reasoned, had ruined our lives from here thereafter, and the next few months were not pretty. They were however very necessary because it was during that time that I learned by putting my trust in my husband, I was really saying that I trusted God.

It's so like humans to take something that seems so simple, and screw that up with our own ideals and beliefs. Step into a church for just a few minutes and it becomes painfully obvious that we have certain ideas about punishment and consequences and very little understanding of Grace. We want to make "sure" that those who offend don't do it again; we want to control, but what we reason as wisdom is really about fear, fear of man, fear of getting hurt once more, and fear of disappointment. I was so very afraid of Kevin's indiscretion, that I was making him pay for it over and over again, ad naseum.

In the tale of the "Prodigal Son", we see a perfect picture of God's grace. A son is given an inheritance, squanders it on pleasures, and when he comes back home, not only are his sins forgiven and forgotten but they literally throw a party for him. This is the message that I just couldn't get for so long. It was the message that even if we make mistakes, God can help us clean it up. He's just waiting for us to ask.

See, God's in the business of redeeming and restoring. We don't have to work at it, we don't have to earn it. It's given freely. Grace is literally "undeserved mercy" and He gives it abundantly. There's no talk of punishment or consequences, or how long the son must repent before he's accepted back to his position in the household. No! He's forgiven, his sins forgotten, and restored!

We make it so complicated don't we? Eventually I realized that God is so much bigger than I thought He was. Not only did He save Kevin and I from financial ruin and redeem our mistake, but He blessed us even more than we could imagine. Even when we "squandered" His gifts, He had more in stock. See God's in the business of redeeming the broken things. That's His Grace. That's His message. All He's waiting for is for us to come back home.