The fight for freedom... 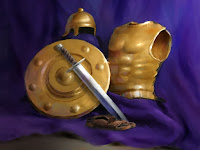 “I know but one freedom and that is the freedom of the mind.”
Antoine de Saint-Exupery
“The secret of happiness is freedom. The secret of freedom is courage.”
Thucydides

It had been a long, hard day for me. I'd just finished up some caregiving tasks for my aging grandmother, and work was particularly dull, not too mention that nasty semi-fight my husband and I had weathered through that morning. I needed coffee and some chocolate. I daydreamed about binging on loaded chocolate chip cookie dough ice cream and drowning my problems in a mocha latte. That's about the time "the voice" usually creeps in and that day was no exception. You're so fat and pathetic. You're weak. Your husband doesn't love you. Your marriage is going to fail. Yeah, that voice, the voice that I'm sure is sometimes the enemy and sometimes my own self hatred and it's definitely the voice that jabs daggers into my newfound freedom.
When I first found freedom in Christ, it was like a light switch had turned on. Gone were the vows and judgements I'd made against myself and others, gone was the unforgiveness that was rotting my spirit. But what I failed to realize then was what a battle, a bloody and long suffering battle, it would be to keep the freedom I'd so recently found. That voice, the one that accuses me, seems to always be there and like Paul encourages, I daily have to take every thought captive. If I don't, I drown in a sea of accusation and condemnation. It's a battlefield out there and without God I'm dead.

When I first came to Christ a non-Christian friend commented on why the Old Testament was so filled with battle scenes. I couldn't answer her. I didn't think that God was particularly cruel and I knew that everything he did was just, and every sentence he carried out was fair. But if she asked me again, I'd know exactly how to answer her. Just as the Isrealites battled and defeated their foes to gain access to the promised land, we must battle to gain the abundant and free life God promises.

Freedom is not for the faint of heart. It takes much less energy to sit in bondage and it's infinitely easier to accept one's status than to fight to change it. Freedom is a daily fight. It's a daily walk in forgiveness and soul purging, a daily practice in clinging to the Vine and devouring the word. Someone should tell you right out; it's a battle so be prepared. And like in every battle there are deserters, fleers, and MIA's because on every battlefield, a constant and unseen foe lurks; fear. And fear can seem larger than life if you aren't connected to the One, the source of all courage.

If I've learned anything in the past six months of this journey, it's that the mind is a battlefield and the prize is freedom, and it's a daily fight and one that's well worth it. It may take less energy to sit in chains in that dark prison that is bondage, but the sweet taste of a life full of the freedom and the abundance I was meant for is worth every drop of sweat along the way.