When the storms come... 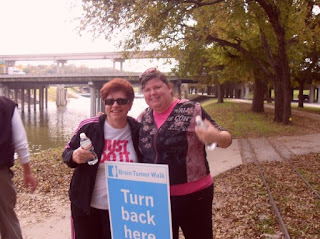 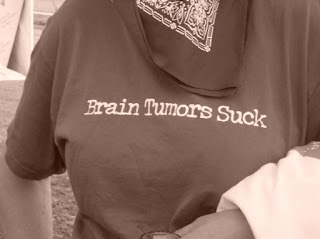 James 1: 2Consider it pure joy, my brothers, whenever you face trials of many kinds, 3because you know that the testing of your faith develops perseverance.

Almost three years ago we said goodbye to my dad who lost his battle with a multiforming glioblastoma brain tumor. He was fifty years old, I was twenty one, and my brother was in his senior year of high school. Right now my Uncle is battling a similar tumor, while his wife is also battling breast cancer, and his children are both under ten years old. So doing the Brain Tumor 5k was important to me. It was almost cathartic to stand with others who knew the pain, the tears, the battle, the wounds.
There were very few runners there. Most of us walked, some with banners that displayed loved ones faces, some with balloons and fun t-shirts. Some were walking in memory of those that had gone before them, others were in the midst of their own battle. But one man caught my eye. He was older, bald, with that familiar long scar across his head. He was limping, just as my dad had, which means his tumor was probably on his right side. But what impressed me was how fast he walked. He finished ahead of our team, and ahead of most of the walkers. Even though he had to drag his left leg behind him, he was going to finish the race, and finish it well.
Tears came to my eyes as I watched him finish. It's a reminder to all of us that no matter what storms come, we can push through them. That's the most important lesson I learned this weekend. Whenever I think that life will overtake me, I'll think of that man, his determination, his drive, and his 'overcomer attitude'.