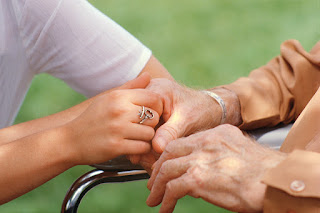 Galatians 6:2 Bear one another's burdens, and thereby fulfill the law of Christ.

James 1:27 Religion that God our Father accepts as pure and faultless is this: to look after orphans and widows in their distress...

It had been one of those days. We'd recently moved in with my elderly and widowed grandmother and I was finally at the end of my fuse. I was mad and bitter and thoughts ran through my head; why was I always the responsible one? Why couldn't anyone else step up? Do they think I'm a doormat? Why won't anyone else do the right thing? In the background I could hear her rumagging through closets, complaining that Kevin and I had brought too many things. This was a change we were all going to have to get used to and it was hardest for her. That day though, I had no sympathy left.

I trudged downstairs to start my morning routine with her; breakfast, medication, naptime, cleaning. It all seemed monotonous and taxing, and I was already exhausted. Although I'd psyched myself up for the move, telling myself that helping family was important, I understood why most Americans had resorted to nursing homes and assisted living. This was hard. Life was not only about me anymore, someone else's needs came alongside mine.

As I made her lunch she began to tell me about her life back in Italy. Story after story poured out of her like a fountain in what we lovingly called "italish." I just listened, amazed at some of the things she had suffered through, and how she'd carried on anyway. I think she was thankful for someone to tell, so that she felt like she could pass something of her wisdom on. I sat ashamed that I had borne such a bad attitude, and blessed that God would give me a chance to learn and grow from this wonderful little lady I called "nonna." It was more blessed to give than to receive, and because I'd given of myself and my time, I'd been blessed in the process.

In a world where reverance for the elderly is dying, God says the opposite. In fact, what looks like foolishness to the world, God considers righteousness. The world has skewed morals and priorities. It's a "ME" mentality that keeps our world going. I had 'spiritual amnesia', realizing that life wasn't all about me once again. I love what one of my pastor's says; that in God's kingdom things seem to work the opposite of the world; to find your life your must lose it, the least will be the first. But I've learned that it's best to trust the Grand Architect, He seems to really know what He's talking about.
Email Post