What cancer can teach us about spiritual life... 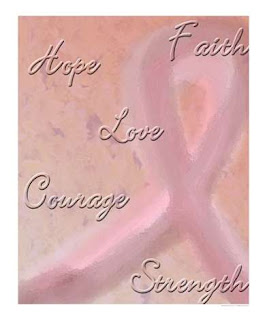 I've dealt with cancer is some form or fashion my whole life. My aunt spent thirteen years in a brain tumor induced coma, my dad had it and eventually succomed to death by it, and now both my uncle and aunt are struggling with it. Some people can find the silver lining, like my aunt who two weeks after her masectomy was running the 'turkey trot 5K,' or my dad who valiantly went through surgery after surgery and treatment after treament with a smile on his face. But for the most part the 'C' word incites fear, anger, and pain.


There's something evil and foreboding about cancer, because it can be characterized as your own body's cells gone wrong. God's creation led astray. Ignoring the rules of cell division, rogue cells divide and grow without any check. Most cells, without getting too scientific, grow until they meet a required surface area to volume ratio, but cancerous cells, our own bodies cells are disobedient to this rule and grow sometimes at a staggering rate creating tumors. Malignant tumors run the risk of metastasis where they send out malignant cells into the blood stream.


The spiritual parallels start to form. Pastor Rober Morris says often that what is 'true in the natural is true in the spiritual.' If the church is 'one body' formed of many parts with different uses, there are naturally going to be some parts, some 'cells' that go rogue and lead others astray.

Romans 12:. 4Just as each of us has one body with many members, and these members do not all have the same function, 5so in Christ we who are many form one body, and each member belongs to all the others. 6We have different gifts, according to the grace given us.
(emphasis mine)

Deuteronomy 27:18
"Cursed is the man who leads the blind astray on the road."

2 Corinthians 11:3
But I am afraid that just as Eve was deceived by the serpent's cunning, your minds may somehow be led astray from your sincere and pure devotion to Christ.

Galatians 2:13
The other Jews joined him in his hypocrisy, so that by their hypocrisy even Barnabas was led astray. (emphasis mine)

We've seen it happen as teenagers. You're in a group, happy, friendly, having a great time. Then someone sitrs up dissention, a rumor possibly. Suddenly it spreads, alienation occurs, and friendships end. It happens the same way in the church. Someone stirs up dissention and that dissention among the church spreads and grows like a tumor until there are many people who are hurt and disillusioned. Some walk away from the church completely and sometimes from God as well.

See, the enemy's strategy hasn't really changed all that much, only the subtle ways in which it's inflicted. He leads God's own creation astray, just as he led Eve astray, just as he leads the church astray, and just as those rogue cells have gone astray from God's original design. I see Satan, the enemy, much like Salieri in the movie Amadeus.

[addressing a crucifix]
Salieri: From now on we are enemies, You and I. Because You choose for Your instrument a boastful, lustful, smutty, infantile boy and give me for reward only the ability to recognize the incarnation. Because You are unjust, unfair, unkind, I will block You, I swear it. I will hinder and harm Your creature on earth as far as I am able.

And 'hinder and harm' us he does, and in the sneakiest ways possible. He uses God's own creation against itself. He used our free will in the garden to get us to turn away from God's truth and that cycle continues. Look to breast cancer, a part of the body that is used to give life and nurturing to babies is suddenly attacked. Satan is attacking life.

Ephesians 6: 10Finally, be strong in the Lord and in his mighty power. 11Put on the full armor of God so that you can take your stand against the devil's schemes. 12For our struggle is not against flesh and blood, but against the rulers, against the authorities, against the powers of this dark world and against the spiritual forces of evil in the heavenly realms.

It's important to have eyes that see past the physical. Ephesians urges us to look deeper, look into the spiritual. This is not just a physical battle, no, it's much more. It's a battle for our heart, our will. It's a battle that's gone on since creation and continues on until that one triumphant moment where the enemy is silenced forever. See we've got a heads up. We've gotten a copy of the enemies battle plan. The proverbial question is "what do you do with it?" What will you do with it?

**A great book about how our physical bodies represent God's spiritual Kingdom is 'In His image' by Dr. Paul Brand and Phillip Yancey.

**note: this post is not meant to trivialize or blame any part of the suffering that those who have cancer deal with daily. This is only used as a spiritual metaphor.