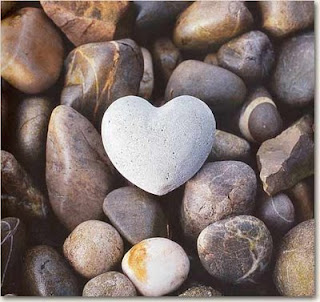 "Do you not know that your body is a temple of the Holy Spirit who is in you, whom you have received from God? (1 Cor. 6:19) Indeed it is. Don't you know that you yourselves are God's temple and that God's spirit lives in you? (1 Cor. 3:16) Okay-each of us in now the temple of God. So where, then, is the Holy of Holies.

~John Eldredge in Waking the Dead

Walk into any Sunday school classroom and ask a kid and they'll tell you exactly where Jesus lives, where God dwells. They'll point to the left side of their chest and proudly beam "He's in my heart!"

And really that's not so far from the truth. Earlier we learned about the wickedness of the fallen heart and the glory of the new one, we learned about what the Hebrew word for heart means and the word picture of it being the "dwelling place of the shepherd", and we learned that God literally takes out our old heart and gives us a new one. I'm excited about that, aren't you? I mean, no longer is my heart or yours wicked and deceitful! God lives there! He ransomed our heart and made us brand new!

As a side note, and a part the I won't particularly get into, there is some intriguing research being done now about the heart, the organ that is. Reading here, you can see that scientists have literally found brain cells, neurons within the heart. It is no longer thought of as just the "body's pump" for blood. Science is learning that the heart is far more complex than they had previously thought. So when those children point to their literal heart or the ancient Hebrews attribute things to the heart, they may not be that far from the truth.

In the original plans for the tabernacle and the temple there was a part of it that only the High Priest could enter and only on the Day of Atonement, known as Yom Kippur, which we just recently passed. In front of the Holy of Holies was a veil, and when Christ died that veil was torn. Communion with God is now possible because of Christ's sacrifice.

The cross was never meant to be the only or even the central symbol of Christianity. That you are shocked by what I've just said only proves how far we've strayed from the faith of the New Testament. The cross is not the sole focal point of Christianity. Paul says so himself: "If Christ has not been raised, our preaching is useless and so is your faith...If Christ has not been raised, your faith is futile; you are still in your sins" (1 Cor. 15:14,17) ~John Eldredge in Waking the Dead.

Christ was raised from the dead, and with it so too were we; brand new, full of life, how we were supposed to be. So then the intriguing question about our hearts now is why is no one living like they're alive, free, released, new, different?

Shane Claiborne echoed this sentiment by saying, "For even if the whole world believed in resurrection, little would change until we began to practice it. We can believe in CPR, but people will remain dead until someone breathes new life into them. And we can tell the world that there is life after death, but the world really seems to be wondering if there is life before death."

This is where the battle begins. The one for your heart. You see, Christ promised abundant life not just in the eternal but here in the now. Salvation is not just about being fire proof. It's not just a "get out of hell" free card in the game of life. Salvation was meant to be more than that! There's more to Christianity than that. It's why we love mythical stories, the ones where the underdog is magically transformed into the hero, the frog into the prince, the beast into the beauty, the cinder girl into a queen. Deep down we know. We know that we were meant for more. Our hearts ache to be more. And we can be. Christ promised us that.

The proverbial question then is what's going wrong in the hearts of Christians? Or rather, who and what is getting to them? Meet me here next time. It's going to be good!