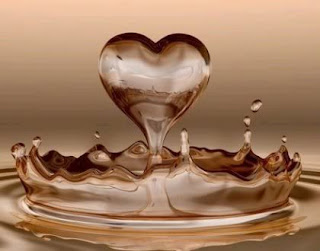 This we now know: the heart is center. It matters-deeply...we must fight for our heart, for it is the wellspring of that life within us. Standing in the way of the path to life-the way of the heart-is a monstrous barrier. It has stopped far too many pilgrims dead in their tracts, for far too long. There is a widespread belief among Christians today that the heart is desperately wicked-even after the person comes to Christ. It is a crippling belief. And it is untrue. ~Waking the Dead by John Eldredge.
I was in my car, cell phone in one hand, my left hand gripping the steering wheel. The newly placed ring on my finger was catching the sunlight and making glittery dots across the roof of the small ford focus. "Hey, I'm getting married!" I shouted at my friend. I beamed at my new ring. I was excited, ecstatic. I knew, here was the man for me! God had told both him and I separately. We'd heard the confirmation that we were supposed to be together, him in a dream, me in a prophecy. On the other line though my friend had a different idea. She screamed, but not in happiness. "Don't you know that the heart is wicked and deceitful above all things! Do you think this is right?" My friend admittedly had every right to be worried. But she did get one thing wrong. The heart is not wicked and deceitful above all things. Not when Christ has ransomed that heart and restored it. Now I bet you're thinking, "Wait a minute. What about that verse...what is it...that the 'heart is deceitful and wicked above all things?" Yes, yes it is. The fallen heart is extremely wicked and deceitful because it belongs in fallen man. It hasn't been ransomed or restored by Christ's final work. It hasn't been set free from bondage. It hasn't been cleansed by the blood. That kind of heart is wicked because it knows nothing else. But there's some great news about our hearts. There is something that happens, something magical, something mythical, something epic, when our hearts are given to Christ.

We've not just been forgiven, our hearts have gotten a makeover. The Christian heart, the "ransomed" heart as John Eldredge calls it, is no longer wicked or deceitful. Christ died for us and with it died our own sin nature, and we are called righteous, friends of God. And when Christ was raised, so were we; new, shiny, different. I want to admonish you that scripture wholeheartedly (ha!) supports this idea. Psalms 78: 70 says “He also chose David his servant, and took him from the sheepfolds, from following the ewes that had young he brought him to shepherd Jacob his people, and Israel, his inheritance. so he shepherded them according to the integrity of his heart, and guided them by the skillfulness of his hands.” David led by what? By the integrity of his heart? Now if his heart was deceitful and wicked above all things, why would he lead with his heart? Deuteronomy 4:29 says "But if from there you seek the LORD your God, you will find him if you look for him with all your heart and with all your soul." Seek him with your what? Your heart? If you're heart is now deceitful and wicked, how can you seek God with it? The word heart is in the bible over 740 times. Obviously God wants to speak to us about our hearts. About how crucial they are. About how central they are. And that's what the war is over you know? For my heart, for yours. You might be asking yourself, as I did, "Okay, so what exactly does scripture mean when it talks about the heart? If it's so central, so important , what and where is it?" You asked the right question, and my next few blogs are going to be about it. Because understanding the heart is key to being God's kind of beautiful. Until next time...
Email Post
Labels: life-giving principles understanding your heart