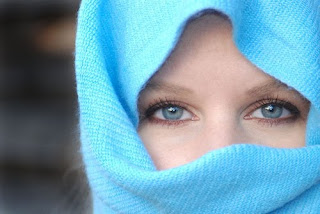 Psalm 115: 5 They have mouths, but cannot speak, eyes, but they cannot see.... Today I opened up one of my favorite magazines and looked at the article in front of me. It was about intiution and trusting your gut. I thought for a moment, trusting your gut....what did that mean to the world, a world who believes that there is no intelligent designer, no spirit realm, no God? Obviously their guts don't have brain cells, so what exactly were they talking about? They are on to something, something key. Some call them "gut feelings," others call it "intuition," but whatever you name it, we're built with a radar that knows that something is either right or wrong, or a little off. For those that are unbelievers this seems like that unsettling feeling you get when someone is following you. But that's not God's original design. Without getting too deep, we are triunal beings; mind, soul, and spirit. (for more on this see www.bobhamp.com in his most recent post). For unbelievers the latter is completely disconnected, and it's only when we are born again with His Spirit that we can reconnect. The Spirit realm becomes visible, tangible, and believe me, there is one. You are actually in the midst of a great battle, if no one's told you yet. I know you've felt it, that constant pull toward doubt both about God and yourself, that sadness, depravity, the yearn to do the right thing but sometimes just not being able to. You're in a battle whether you like it or not and the scriptures talk about it. Ephesians 6:12 For our struggle is not against flesh and blood, but against the rulers, against the authorities, against the powers of this dark world and against the spiritual forces of evil in the heavenly realms. 1 Peter 5:8 Be self-controlled and alert. Your enemy the devil prowls around like a roaring lion looking for someone to devour. Yup, you have an enemy. And you have a Savior. You have a God that's already fought and won, and one day will come to claim His bride. And guess what? He'll be riding on a white horse. But in the meantime we've got to have the 'eyes that see.' We've got to understand both ourselves and the world at war that we live in. It's key to getting freedom and keeping it. It's key to guarding your heart. It's key to growing the kingdom of God. I'm not talking about exorcising, or devil blaming here. I'm talking about knowing the truth. Where there is the hero, there is the sinister evil doer. Think about it. We're built to know this. Watch Lord of the Rings, Chronicles of Narnia, Cinderella, The Princess Bride, The Matrix. So what do we do once we are 'seeing' clearly? Do we put holy oil on our doors, banish the demons and blame every tragedy on the Devil and hide in our houses? Some do. But I think God's got a more effective plan of action. John 15: 5"I am the vine; you are the branches. If a man remains in me and I in him, he will bear much fruit; apart from me you can do nothing. 6If anyone does not remain in me, he is like a branch that is thrown away and withers; such branches are picked up, thrown into the fire and burned. Deep down we women have a fantasy. We long for someone to fight on our behalf, someone to rescue us and fight the monsters. It's a deep longing that's put there for a reason. Because there is someone bigger and stronger to fight for you! His name is Jesus and if you stick with Him, no matter what comes your way you'll be okay. But one word of caution. Your enemy is cunning. His best strategy is to get you alone, divide and conquer. He'll do anything to get you to move away from Christ, and he'll do anything to isolate you. This is where your "eyes" that see, your spiritual eyes will be key. Stick with Him no matter what's thrown your way. No matter what lies your told about yourself or about who God is (and the enemy, he loves to lie). Jesus is the prince you've been waiting for, the one that fights for you. And Heck, he even has the white horse!
Email Post
Labels: freedom life-giving principles